Banana Cream Pie Cupcakes is an easy to follow cupcake recipe for a tender vanilla cupcake filled with a luscious banana cream custard and topped with a banana buttercream…..reminiscent of banana cream pie. 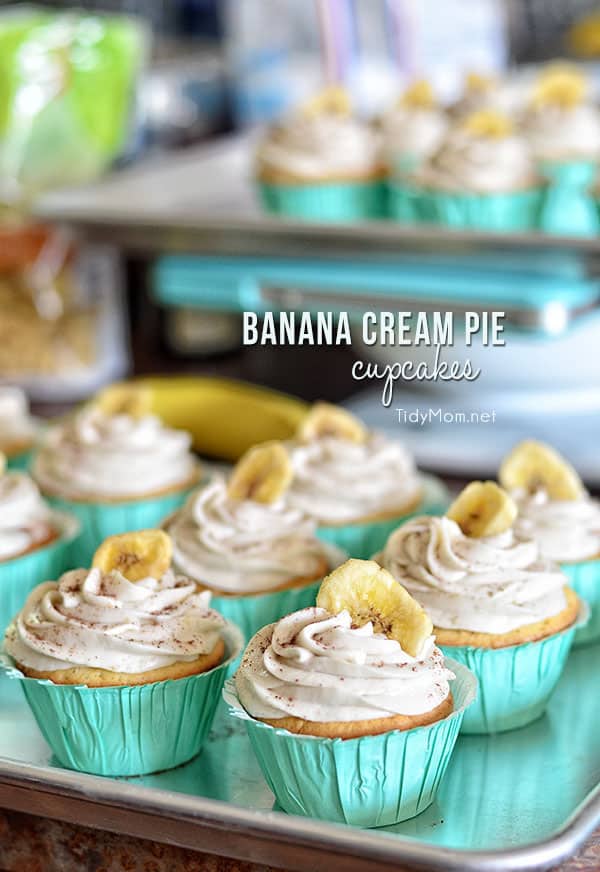 I hope all you Mom’s had a beautiful Mother’s Day!  I had a wonderful weekend that started with a relaxing massage on Saturday.  I’m thoroughly convinced that every one should have a therapeutic massage at least once in their life!  or better yet, at least a few times a year.  Getting a massage helps you relax, relieve tension, and de-stress, and it also helps boost your immune system!  It was just what I needed, and this one was one of the best I’ve ever had!

You know what else relives tension?………a REALLY good cupcake!! 😉

Allison wanted to take a special treat to the teachers and staff for her last day of high school last week…..and I love any excuse to make cupcakes!

We brainstormed flavor combinations for a few days until we decided on banana.  But not just any banana cupcake, we wanted something luscious and cream filled ……reminiscent of banana cream pie.

You see, we filled tender french vanilla cupcakes with a heavenly banana cream custard.   We ate this stuff by the spoonful!  I almost had to make another batch for the cupcakes.  We then topped the whole thing with a swoon-worthy banana buttercream frosting!

They were a HUGE hit at school, and my family says they are probably the best cupcakes we’ve ever made ~although I think they say that every time I make a new cupcake 😉

Allison said they remind her when you find a little gooey under-baked section in the middle of a loaf of banana bread (the best part, according to her).

I had a hard time coming up with a name for these cupcakes.  But, Banana Cream Pie Cupcakes seemed to be perfect!

It’s hard to believe she has finished school.  The next few weeks will be a whirlwind with baccalaureate, graduation, and parties.  August will be here before we know it and we’ll be packing her off to college (making us empty nesters! gasp)…….hold me.  I’m. NOT. READY……now excuse me while I go eat another cupcake. 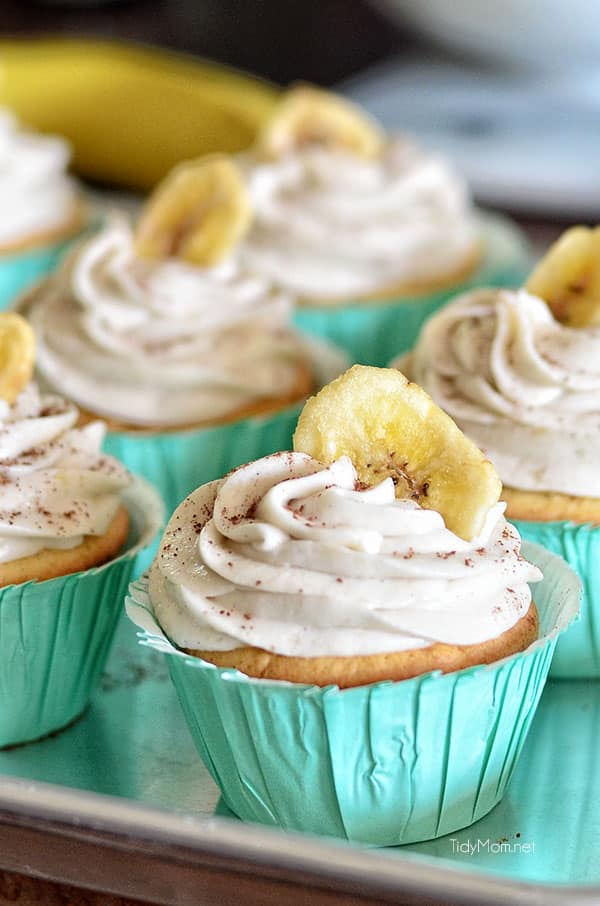 Don’t be put off by how long this recipe looks.  It’s really pretty simple cupcake recipe.  I started by mixing up a batch of  Perfect Cupcakes using a mix  ‘recipe’ with my favorite French Vanilla Cake Mix.  The custard filling and buttercream frosting recipe can both be made while the cupcakes bake and cool.  Then use a sharp knife to cut out a cone-shaped section of each cupcake, fill with custard, pipe on frosting and decorate with a dusting of cocoa powder and a banana chip if you want!

I made 24 cupcakes in about an hour.  Or you could make each step ahead of time, and assemble right before serving.

CHECK OUT HOW EASY THIS BANANA CREAM PIE CUPCAKES RECIPE IS TO MAKE! WATCH THE VIDEO!

For the Banana Cream Custard Filling

For cupcakes For Filling For Banana Buttercream In a medium mixing bowl beat butter with an electric mixer on medium speed 2-3 minutes until smooth. Add banana and continue beating another 2 minutes. Gradually add 3 cups of the powdered sugar, one cup at a time, beating well. Add cream and vanilla beating an additional 1-2 minutes. Gradually beat in the remaining powdered sugar until frosting reaches piping consistency. Assemble Cupcakes