You’re going to love these baked Cinnamon Donuts. Not only are they soft, fluffy, and bursting with warm flavors like cinnamon and nutmeg, but they are topped with browned butter vanilla bean glaze!

If you enjoy homemade donuts as much as we do, try my Apple Cider Donuts, Maple and Cinnamon Donuts, Cinnamon and Sugar Donut Muffins and Glazed Pumpkin Doughnut Muffins.

Why We Love Baked Cinnamon Donuts

Some people only crave cinnamon-spiced desserts during the Fall and Winter… I am not one of those people! These homemade cinnamon donuts with vanilla bean glaze are gobbled up in my house during all seasons. I don’t even know what part of the donut my family loves more – the rich, flavorful spiced donut itself, or the perfectly sweet vanilla glaze!

Forget the doughnut shop –if you have a donut pan, you can have homemade donuts at home any day! Don’t have a donut pan yet? A muffin pan will work, they just won’t be donut-shaped.

No mixer is needed and it takes less than 20 minutes to get your donuts on the table. Not only are they perfect for breakfast, but they make a great after-school snack, too. 😉
These glazed cinnamon donuts are baked, not fried. Score one for the waistline!! But don’t let that fool you, they are every bit as moist and tender, you’d never guess they were baked. Then dunked in a delicious donut glaze that gets all crisp and crackly making these donuts just as perfect as the donut shop glaze….even better in my book!

How To Make Cinnamon Donuts With Vanilla Bean Glaze

(full printable recipe at the end of this post)

While some donut recipes can be a bit intimidating, this one really couldn’t be any easier! I like my desserts to be delicious and easy to whip up, which is exactly what these donuts are. Once you see how simple this recipe really is, you’ll be finding reasons to make these cinnamon donuts all the time!

STEP ONE: Preheat your oven to 350F. While you’re waiting for that to heat up, spray a donut pan with non-stick spray and set it aside.
STEP TWO: In a large mixing bowl mix the wet and dry ingredients all together with a wooden spoon until just combined. Do not overmix! Expect the batter to be thick.
STEP THREE:  Spoon the batter into the donut pan. PRO TIP:  place the donut batter in a large ziplock bag, cut off one corner of the bag, then pipe the batter into each donut cup, filling them about ¾ of the way full.
Bake the donuts for 9-10 minutes,  then transfer the donuts to a cooling rack. 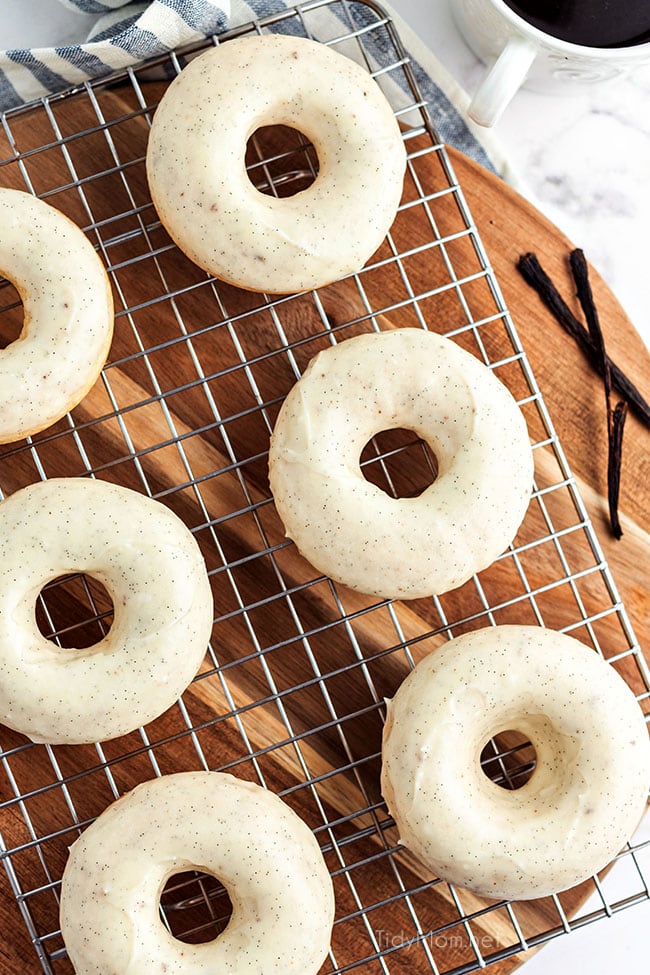 While the donuts are cooling, you can make the glaze!

Start by using a small saucepan over low heat to make browned butter. This should take about 8-10 minutes. Carefully pour the butter into a small bowl, leaving sediment behind.
Add powdered sugar, milk, and vanilla bean paste to the butter. Whisk all of the ingredients together until the mixture is smooth.
Dip the donut tops, which can be fully cooled or still slightly warm, into the glaze. Donuts are best served immediately, of course! Enjoy!

How To Glaze Donuts

Once the cinnamon donuts are cooled, you can glaze them!

Take one donut at-a-time and dip it upside down into the glaze, so it’s evenly coated on half of the donut. You can leave them plain or sprinkle cinnamon or sprinkles over the top.

Leave the glazed donuts at room temperature to set and then store them in an airtight container for up to three days.

Do NOT overmix the batter. Using a wooden spoon, mix just until the dry ingredients are moistened, about 15 to 20 light strokes. There should be some small lumps remaining in the batter. Overmixing can cause donuts to be tough, bake unevenly, and create holes or tunnels in the baked donuts.

If you want the donuts to be picture-perfect, use the piping bag method to place the thick batter into the donut cups. It’s an easy way to make sure all of the donuts look the same! If you’re not careful, the spoon method of placing the batter can look a bit sloppy.

You can make this donut recipe using muffin pans:

Don’t be afraid to have some fun with this recipe! For example, you could sprinkle Cinnamon Toast cereal on top of the glaze before it dries. It’s a way to add both flavor and texture to these already delicious donuts!

If cinnamon is the flavor you want more of, you can either add it to the glaze mixture or sprinkle it on top of the glazed donut as it’s drying. Either way, that extra little kick of cinnamon is so tasty!

You’re going to love these easy baked Cinnamon Donuts. Not only are they soft, fluffy, and bursting with warm flavors like cinnamon and nutmeg, but they are topped with vanilla bean glaze!

TIP: You can make this recipe using muffin pans

END_OF_DOCUMENT_TOKEN_TO_BE_REPLACED 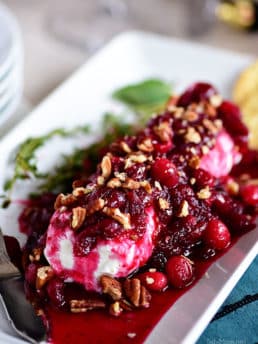