This cinnamon-infused sweet potato casserole recipe with a pecan-pie-inspired topping highlights all the wonderful flavors of the holiday season! Roasted Sweet Potatoes with Cinnamon Pecan Crunch will be the first thing to disappear from the table. 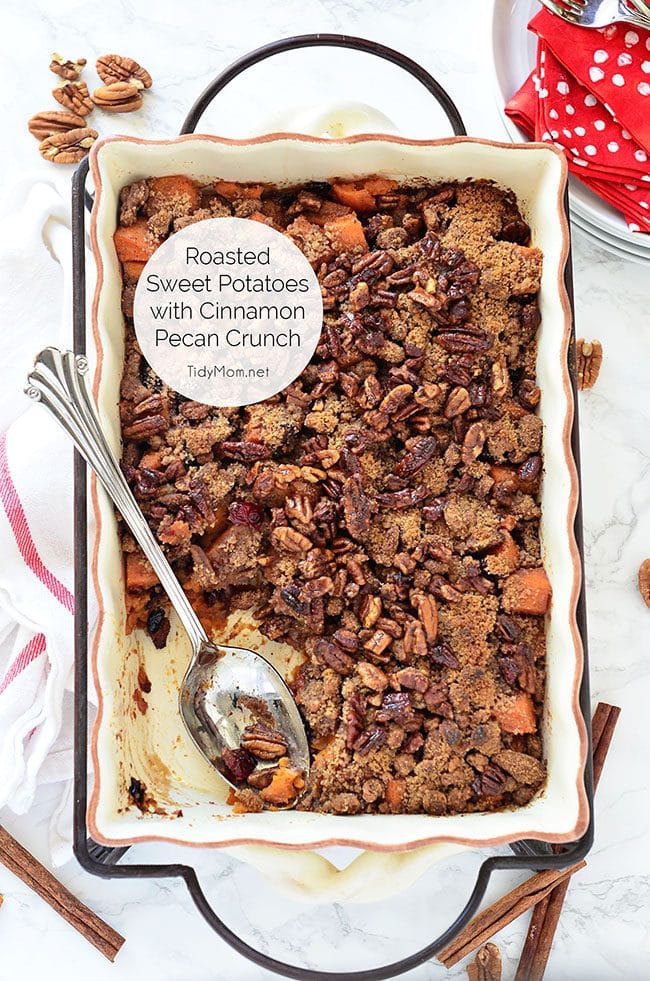 When I was growing up, I didn’t really care for sweet potatoes, unless they were covered in marshmallow.  Even then, I think I really ate them for the killer toasted marshmallows on top, that showed up on our dinner table every Thanksgiving.  It wasn’t until I had my own family that my real love for sweet potatoes (not marshmallows) began to grow.

Most of us still love and crave the cinnamon and sugary classic side-dish, but when you add a pecan-pie-inspired topping, it brings a festive twist to classic sweet potato casserole…….and I promise, no one will ever miss the marshmallows. 😉

If you’re still working on your holiday menu, you’re going to want to save room for Roasted Sweet Potatoes with Cinnamon Pecan Crunch.  It’s sure to be a family favorite

Prep time is only about 15-20 minutes……..grab your apron and let’s get started.

How To Make The Best Roasted Sweet Potato Casserole 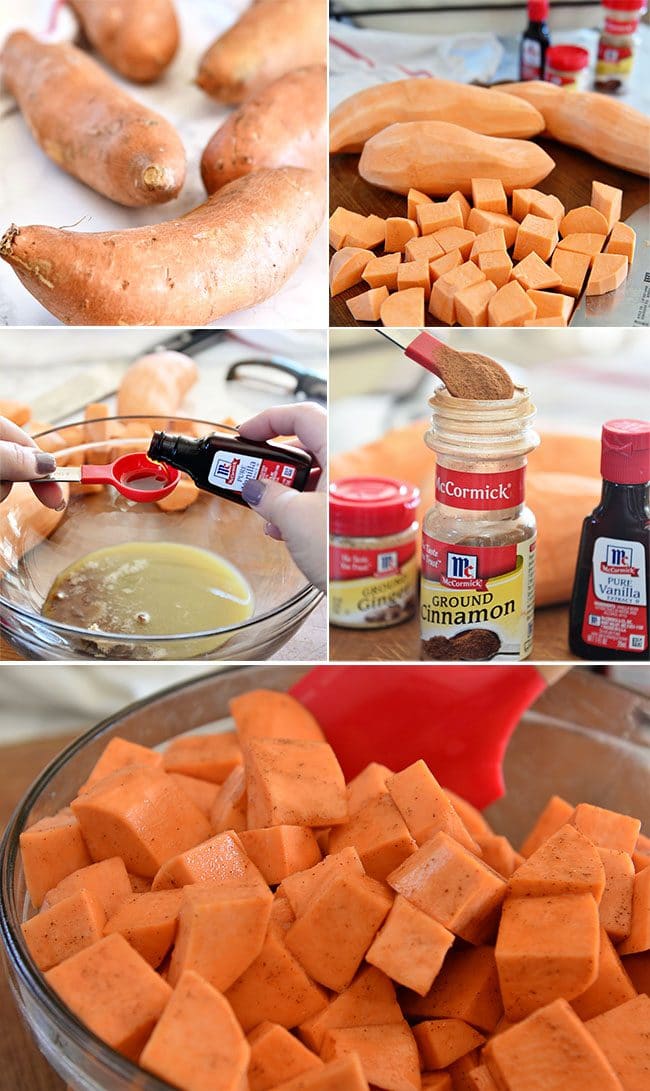 (the full printable recipe is at the end of this post) 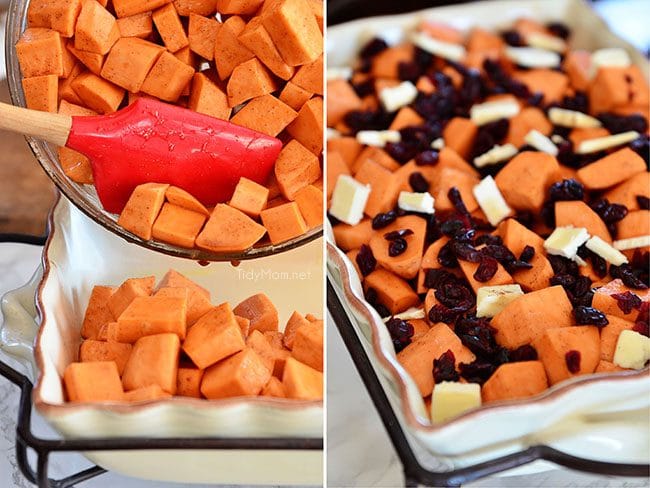 Spoon seasoned sweet potatoes into a 9×13 baking dish and sprinkle with ruby red dried cranberries, dot with butter, cover with foil and place in a 400°F oven for 30 minutes. 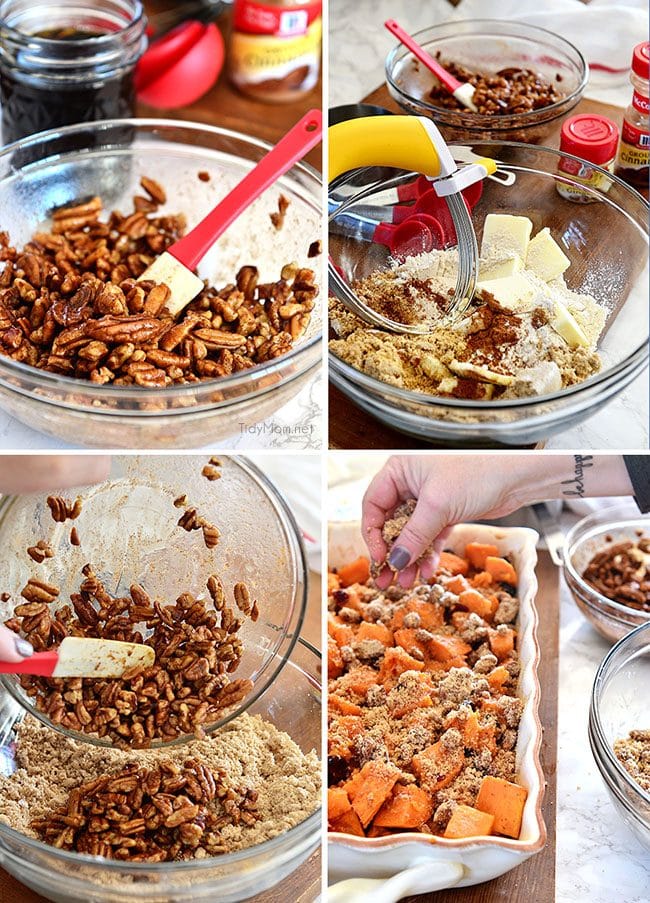 While potatoes are baking, prepare the maple cinnamon pecans and cinnamon pecan crunch topping that will leave your guests wanting more. Place the pecans in a small bowl and toss with maple syrup and ground cinnamon until well coated.

In a medium bowl, mix flour, remaining brown sugar and cinnamon and ginger in a medium bowl. Cut in butter with a fork until coarse crumbs form.  Stir in most of the maple cinnamon pecans (save some to add to top after baking).

Remove potatoes from the oven, gently stir, then add cinnamon pecan crunch topping, return the dish to the oven, uncovered, for 20-25 minutes, until sweet potatoes are tender and topping is lightly brown. 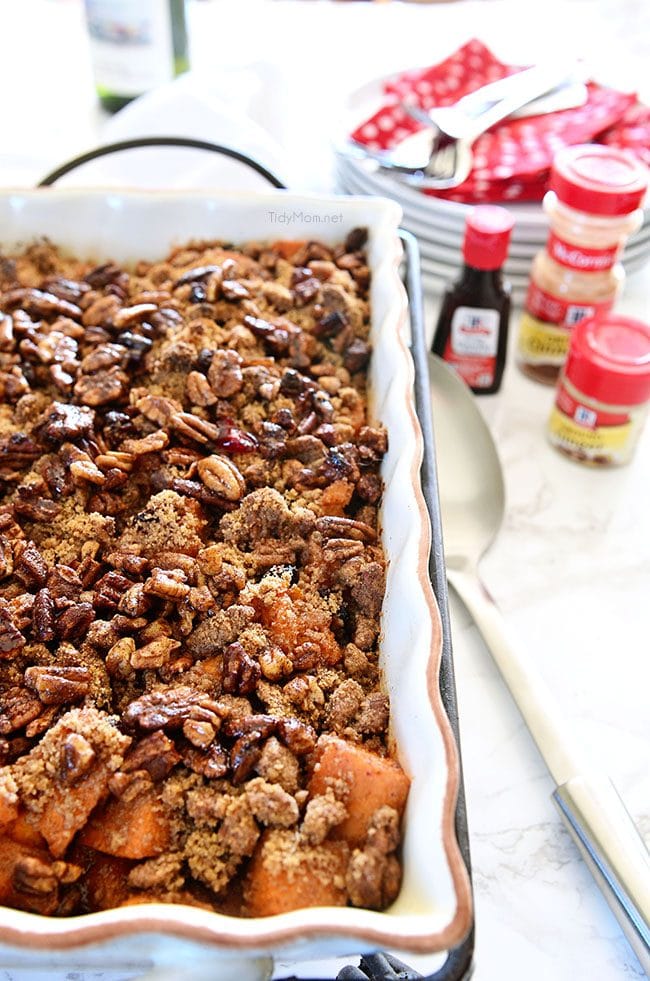 Like many sweet potato casseroles, Roasted Sweet Potatoes with Cinnamon Pecan Crunch could almost pass as a dessert….. a sweet potato crisp if you will.  I love the unexpected sweet and tart addition the cranberries give it, I think it’s even more delicious and worthy of being on the holiday menu as the all-too-famous puffed marshmallow bombed sweet potato casserole. 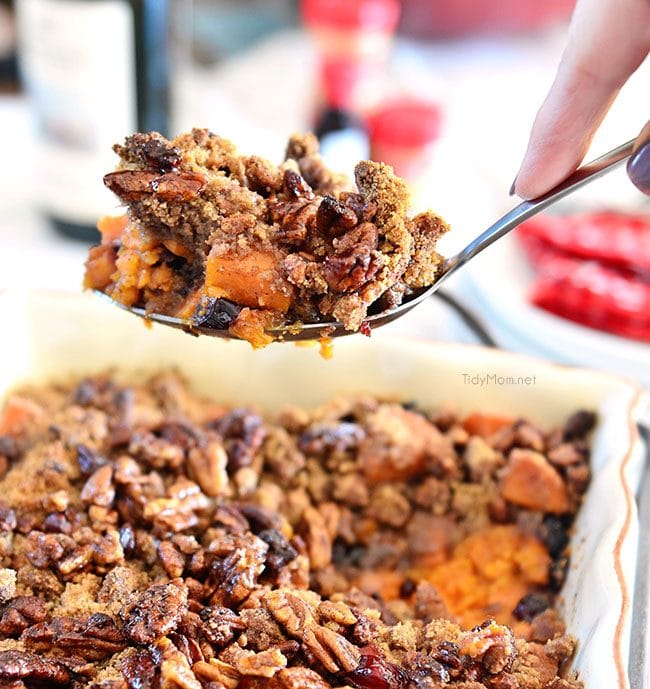 Though this recipe is special enough for Thanksgiving or any holiday, it’s easy enough for any meal anytime.

I created a fun little group on facebook and I’d love for you to join in! It’s a place where you can share YOUR favorite recipes, home tips, creative ideas and ask questions and see what’s new with TidyMom! If you’d like to check it out, you can request to join HERE. Be sure to follow me on Instagram and tag #tidymom so I can see all the wonderful TidyMom recipes YOU make and tips YOU use!

Disclaimer: I have been baking and cooking with McCormick in my home for 30 years.  I’m super excited to have a working partnership with them.  As always, all opinions and views are all my own.

END_OF_DOCUMENT_TOKEN_TO_BE_REPLACED

8 Must Try Restaurants North of The Chicago Loop