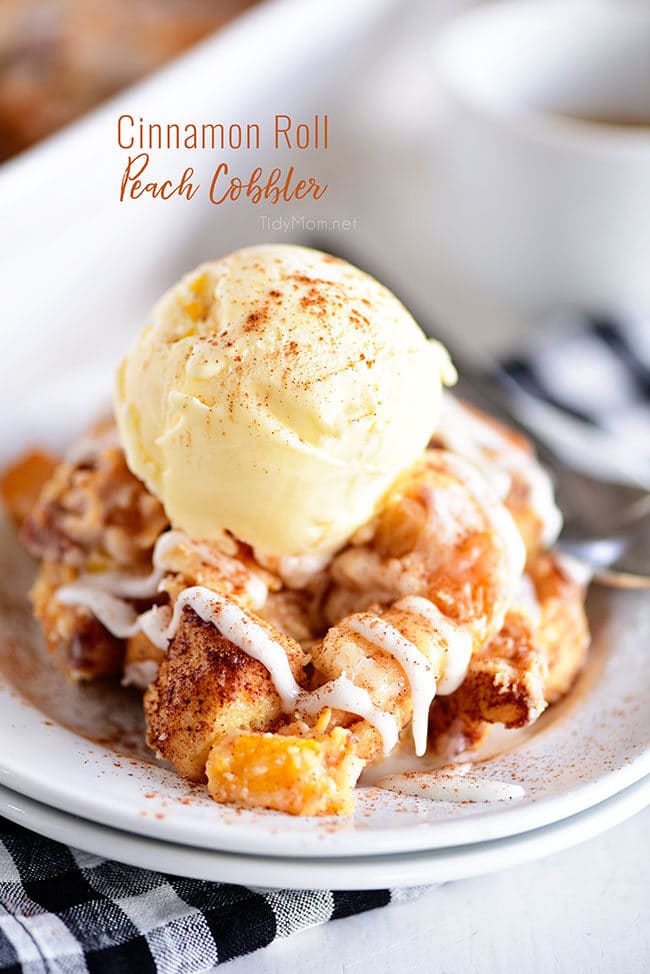 If any of you have been around here for a while, you might know that pastries are my number one weakness! Don’t get me wrong, I love cookies and cake just as much as the next girl, but put a pastry of any kind in front of me and all of my self-control goes out the window.

The only thing that might rival my love of pastries is my love of fresh peaches, so naturally, this cinnamon roll peach cobbler did not last long in my kitchen!

If you’re feeling like you’re in a dessert rut and are sick of the traditional peach cobbler recipe you’ve been making all summer, do something a little different and ditch the traditional biscuit cobbler topping and opt for cinnamon rolls instead!

This dessert can also be served as a peach pie breakfast casserole, or as an easy no-fuss dessert because with a dish this good full of fresh in-season peaches, and light and fluffy cinnamon rolls, there’s never a bad time to have a piece. 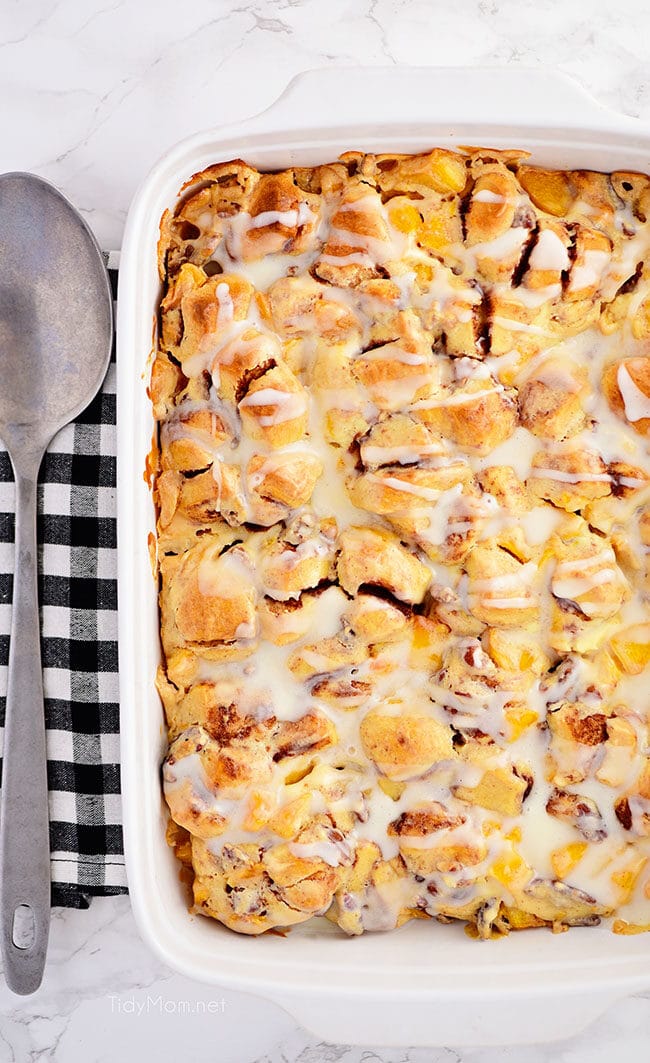 You’ll want to start by heating the oven and spraying a baking dish with cooking spray, then set it aside. Next, In a large bowl, using an electric mixer combine the softened cream cheese and powdered sugar until everything is well blended, and add the almond extract and peaches. Continue mixing on low until well incorporated.

Separate the cinnamon roll dough and cut each roll into pieces and fold the cinnamon rolls and pecans into the peach mixture. Spoon the mixture into a baking dish and bake until bubbling around edges and dough is baked through in the center. While the cobbler cools you’ll want to make the vanilla glaze.

Whisk powdered sugar, vanilla extract, and heavy cream or milk together and add the additional heavy cream/milk if the glaze is too thick. Once the cobbler has cooled, drizzle with the vanilla glaze and serve warm. Top with vanilla ice cream if desired. Enjoy!

If you aren’t a fan of peaches, that’s okay! You can easily swap out the peaches for your favorite seasonal fruit. While I haven’t tried it with anything other than peaches, I’m sure it would be just as good with blueberries, strawberries, apples, or any other fruit you could think of. 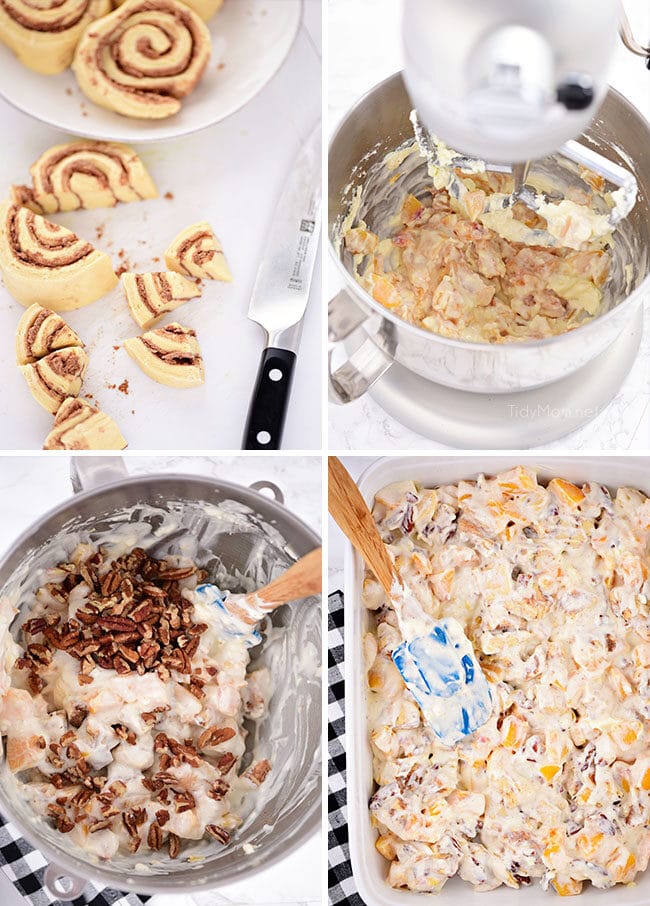 When To Serve a Cinnamon Roll Peach Cobbler?

There’s no bad time to serve this cinnamon roll peach cobbler! Consider it a peach inspired breakfast casserole and serve it first thing in the morning, have it has a mid-day snack, or as an after-dinner treat. No matter when you serve it, it will surely be gone in seconds, because no one will be able to resist.

I think this would make an amazing brunch staple for occasions like mother’s day, Easter, wedding showers, or any other occasion that calls for champagne and good food in the morning. Serve it up alongside a drink station, like this Italian Soda Bar,  and a few other brunch staples and you’ll have the perfect party spread. 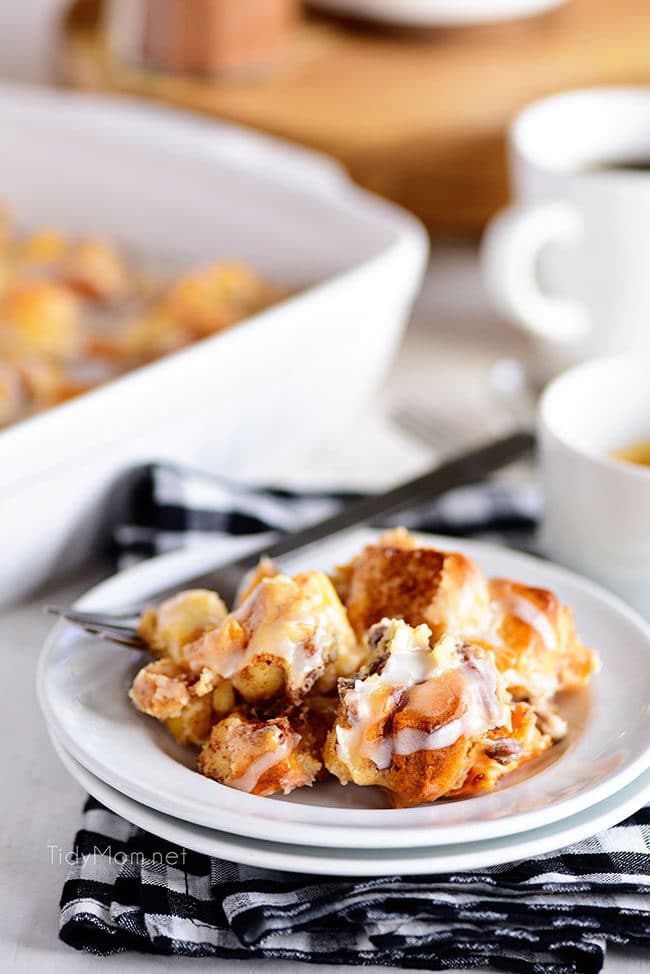 How Do I Store This Peach Pie Breakfast Casserole?

You could also leave it to sit on the counter at room temperature, it just might not stay fresh as long, and will be more apt to start to mold.

This cinnamon roll peach cobbler, since bread-based, will unfortunately not keep very long after originally baked. So, you’ll want to eat this one quick as its best on day one, warm out of the oven, but it will stay good for up to 3-4 days before the cinnamon rolls begin to get stale. 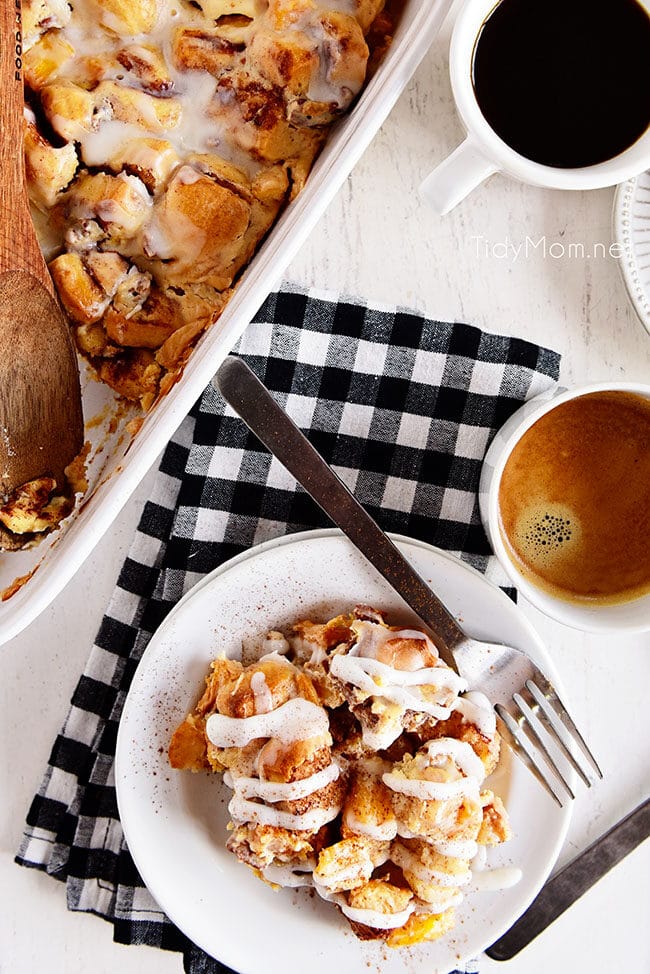 Some Tips For Making The Best Cinnamon Roll Peach Cobbler 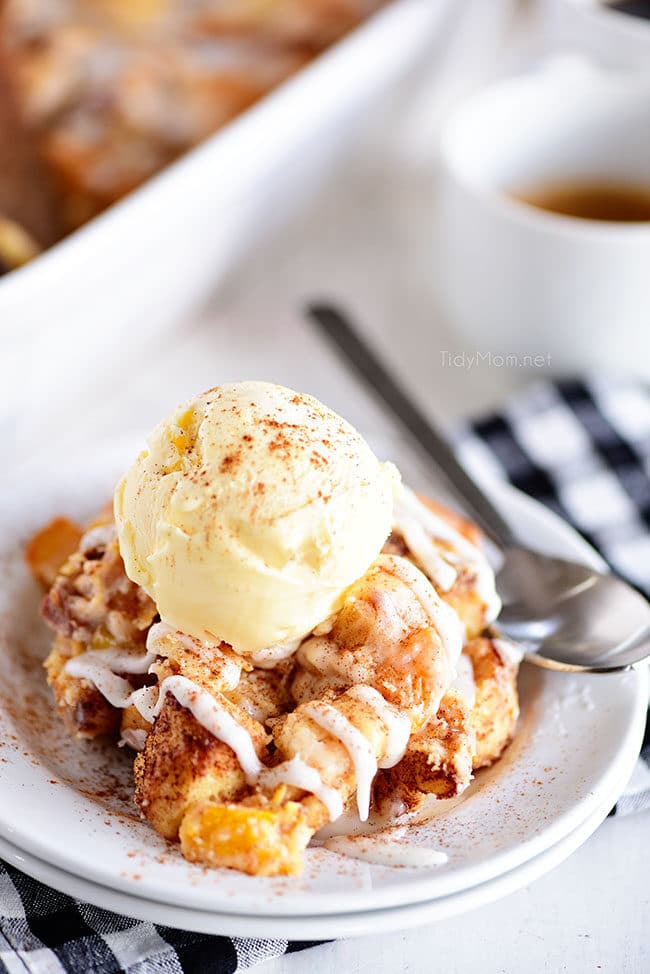 Cinnamon Roll Poke Cake – There’s a reason poke cakes are so popular. They are simple to make and oh so delicious and indulgent and this poke cake is no exception.  Serve with vanilla ice cream and caramel sauce and watch it disappear quickly.

Blueberry Breakfast Casserole With Cinnamon Rolls – This takes cinnamon rolls to the next level for a decadent sweet breakfast or dessert. With cinnamon rolls, cream cheese and loaded with juicy blueberries and fresh lemon zest it’s one of the greatest things to ever happen to blueberries!!

Cinnamon Rolls Baked Oatmeal Muffins – An easy and healthier breakfast recipe. Baked oatmeal is always delicious, but turn them into baked oatmeal muffins and they’re perfect for breakfast or snack – and the kids will love them.

Pumpkin Spice Cinnamon Roll Cookies – Full of pumpkin spice and everything nice!  The pumpkin glaze on top makes them an irresistible fall treat. 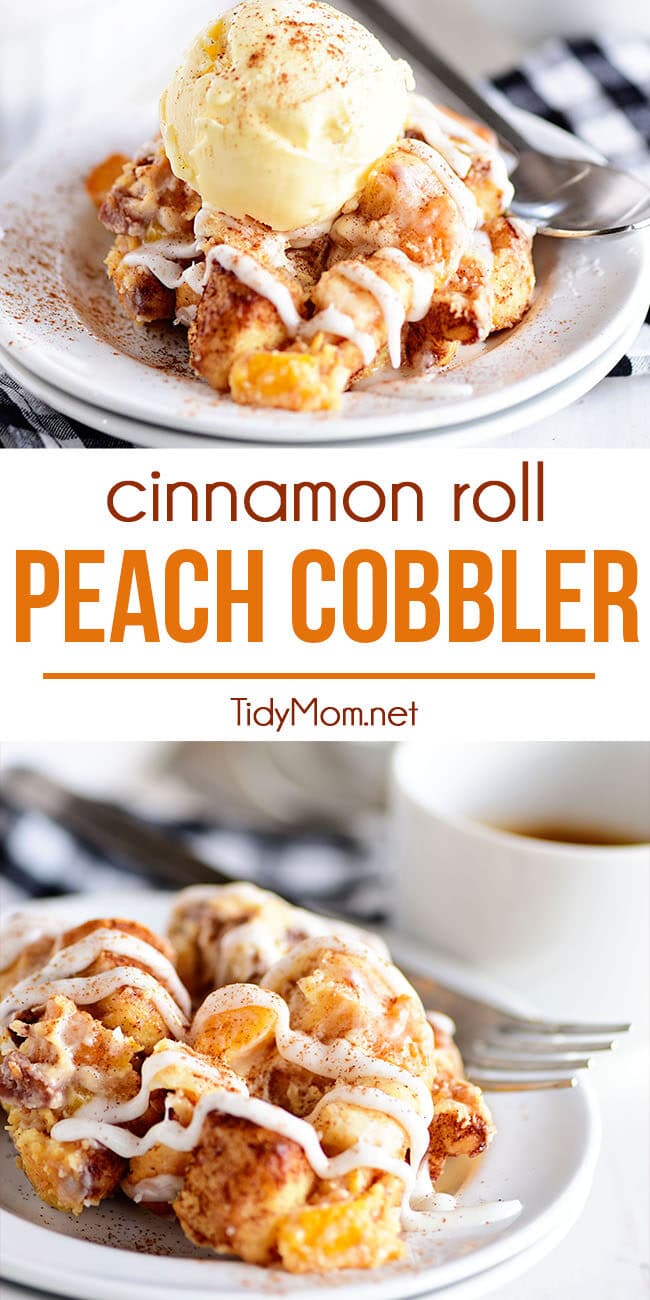 A good whisk will always be better than using just a fork. This silicone whisk is my favorite and perfect for any recipe.

Sometimes I want to switch things up from just a normal square or rectangle casserole dish, and this oblong one does just the trick!

We created a fun little group on facebook and I’d love for you to join in! It’s a place where you can share YOUR favorite recipes, home tips, creative ideas and ask questions and see what’s new with TidyMom! If you’d like to check it out, you can request to join HERE.

This cobbler makes a delicious breakfast casserole or dessert.