The stars aren’t the only ones stealing the show this awards season. King’s Hawaiian bread soaked in a rich dark chocolate custard topped with more chocolate before being baked, served warm with raspberry sauce and Bailey’s whipped cream becomes a Dark Chocolate Bread Pudding with Raspberry Sauce.  Simple, yet elegant enough for the red carpet. 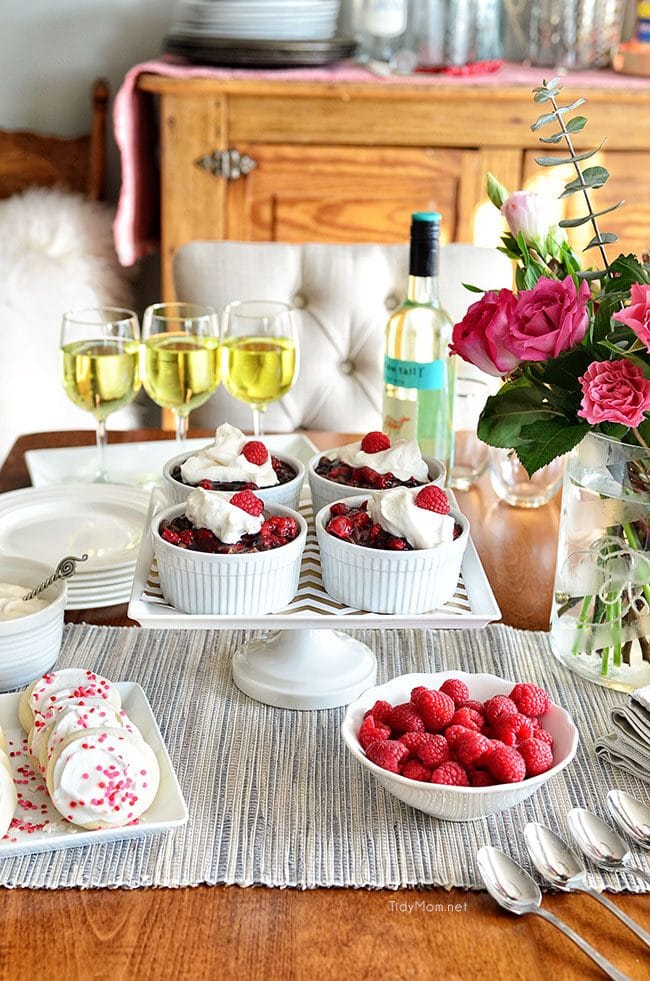 Happy Monday!!  I hope you were able to spend Valentines Day with someone you love, whether it’s a significant other, family or girl friends.    Did you watch the SNL 40th reunion last night?  It was 210 nostalgia-packed minutes of star studded comedy bliss.  We watched the entire show, including the red carpet which, included pretty much everyone who’s famous.

The show was perfectly placed on a Sunday evening, just one week before the Oscars, and a few weeks after the Grammy’s and Golden Globes.  Awards season is always one of our favorite TV times of the year, as our Sunday evenings heat up with all of our favorite celebrities.  It makes you want to dress up and throw a party!

Next weekend it’s the Oscars – great movies, grand speeches, flowing gowns, and black and white tuxes.Whether you are throwing a party with all your friends to watch as Hollywood’s elite walk down the red carpet or you’re just planning on curling up on the sofa — celebrate the biggest night for movies with a decadent, award-worthy dessert, Dark Chocolate Bread Pudding with Raspberry Sauce and Bailey’s Whipped Cream.  The perfect “fancy without actually being fancy” dessert. 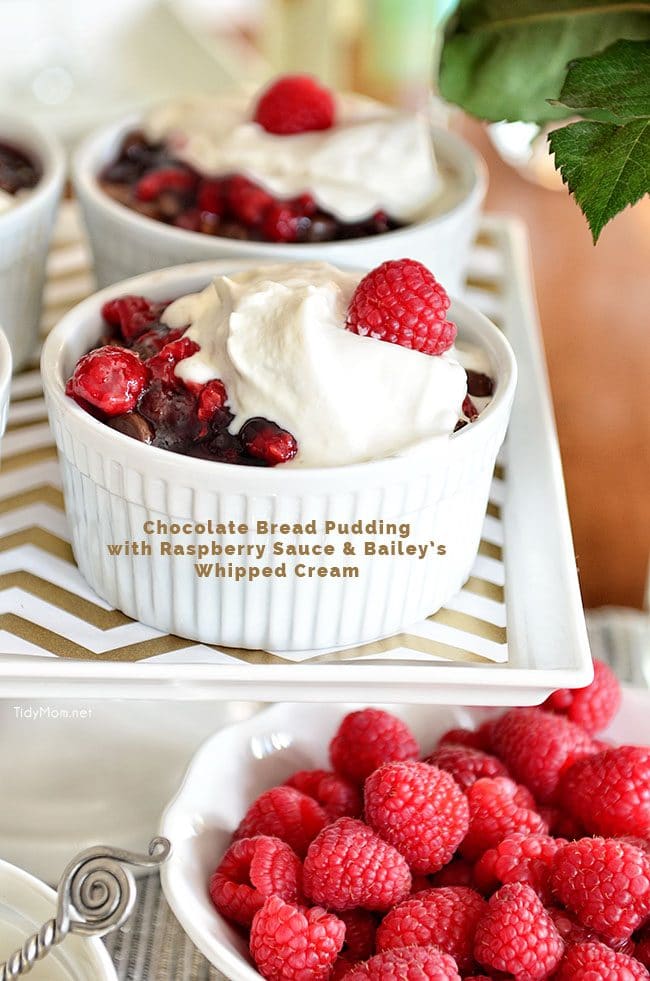 If you aren’t familiar, bread pudding is a cross between a custard and a cake.  It can be made in advance.  The comfort food dessert is perfect for serving a crowd family-style, but can also be prepared in a smaller individual servings, making it a little more elegant. With single serving bread pudding, you get the flavor of all that comfort food in a dressed up package. 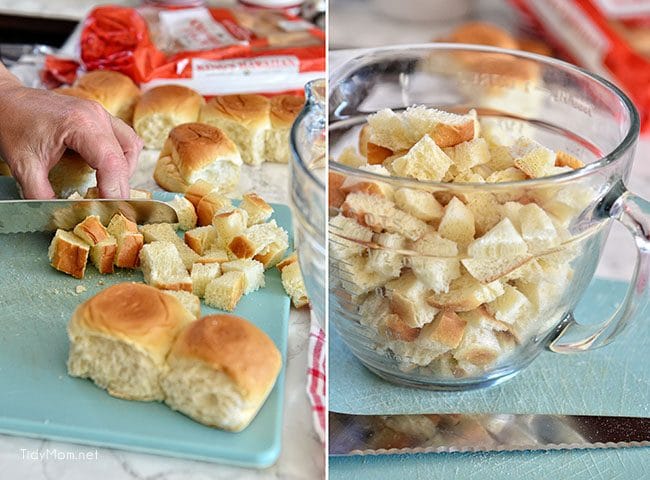 I’ve partnered with KING’S HAWAIIAN bread to put on the glitz and create an awards season recipe worthy of a cocktail party or viewing party.  We love having King’s Hawaiian rolls with dinner and for mini sandwiches.  I’ve also been known to just grab one as a snack, so I knew our favorite sweet dinner rolls would be perfect for a tasty chocolate bread pudding.

Bread pudding is made with stale bread. I opened up and separated a package of King’s Hawaiian dinner rolls, and left them sit open on the kitchen counter over night, then cut into cubes.  You could even cut them into cubes the day before and leave them spread out on a pan overnight to get a stale as well. 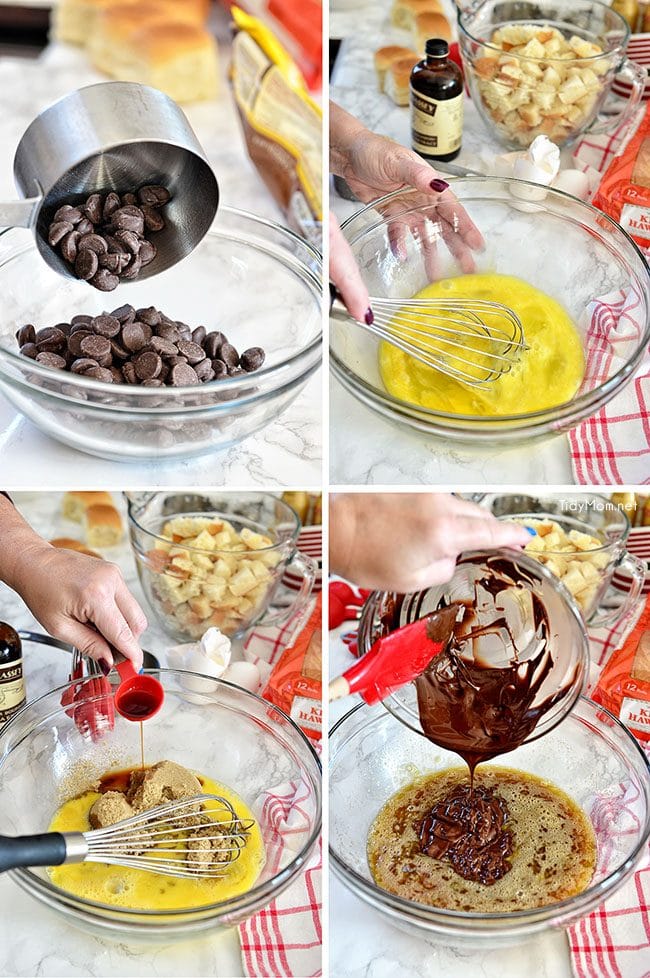 When I was ready to make the chocolate bread pudding (full recipe at the end of the post) ; I got started by melting some dark chocolate, whisked a few eggs, brown sugar and vanilla, and add the cooled chocolate. 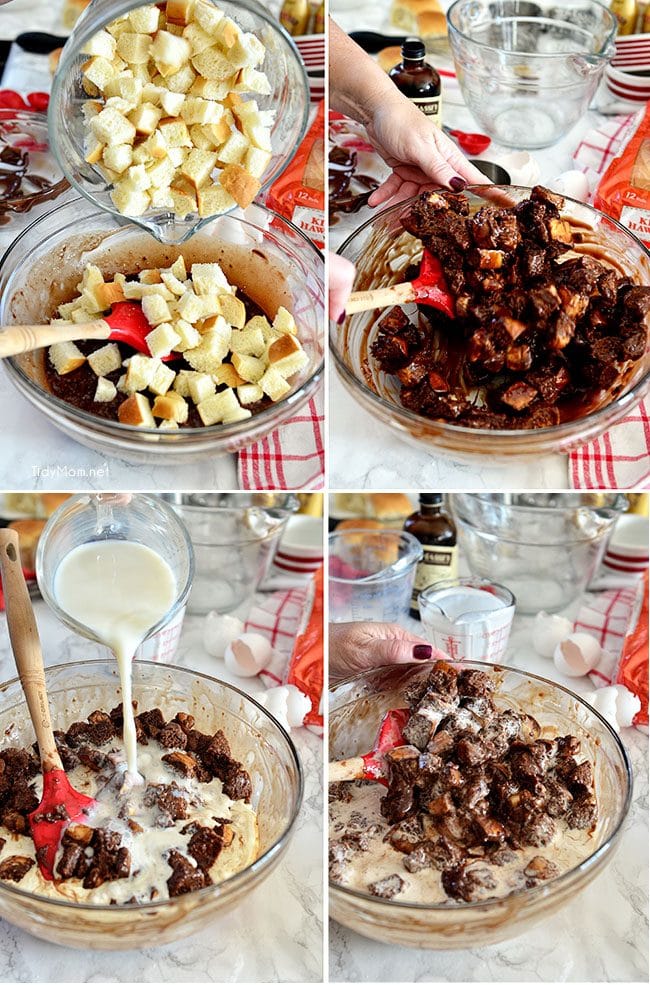 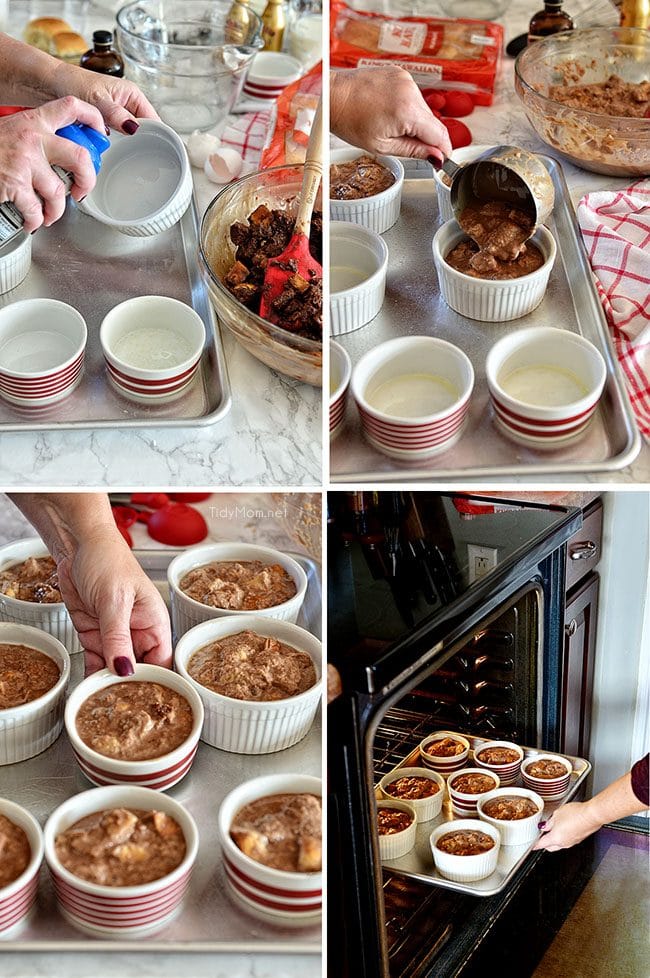 I used 2 different sized ramekins.  I sprayed them with cooking spray, placed them on a baking sheet, filled with the custard soaked bread, and top with a few chocolate chips** and placed them in the oven.

**Note, I placed my bread pudding in the oven for the photo and realized I had forgotten to add the chocolate chips to the top.  So I pulled them out real quick and added them.That’s why you don’t see the chocolate chips in my picture as they are going in the oven.  — are you seeing a trend here?  It’s really hard to take pictures while making a recipe. 😉 props to those who pull it off all the time. 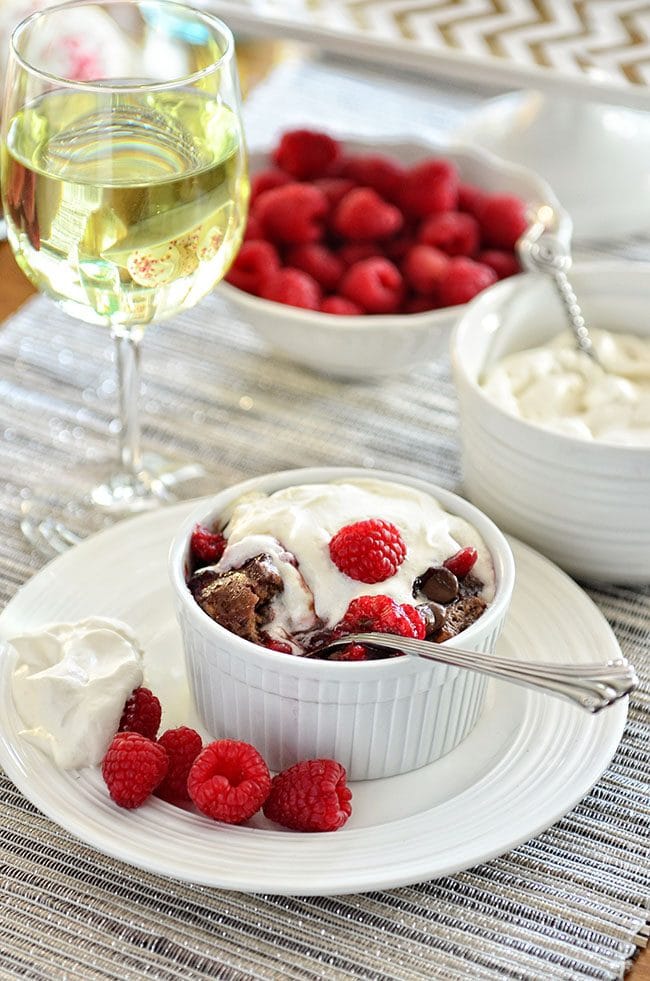 While the bread pudding was in the oven I chopped some fresh raspberries ( you could use frozen as well) and mixed them into some seedless raspberry jam that I had warmed slightly in the microwave. 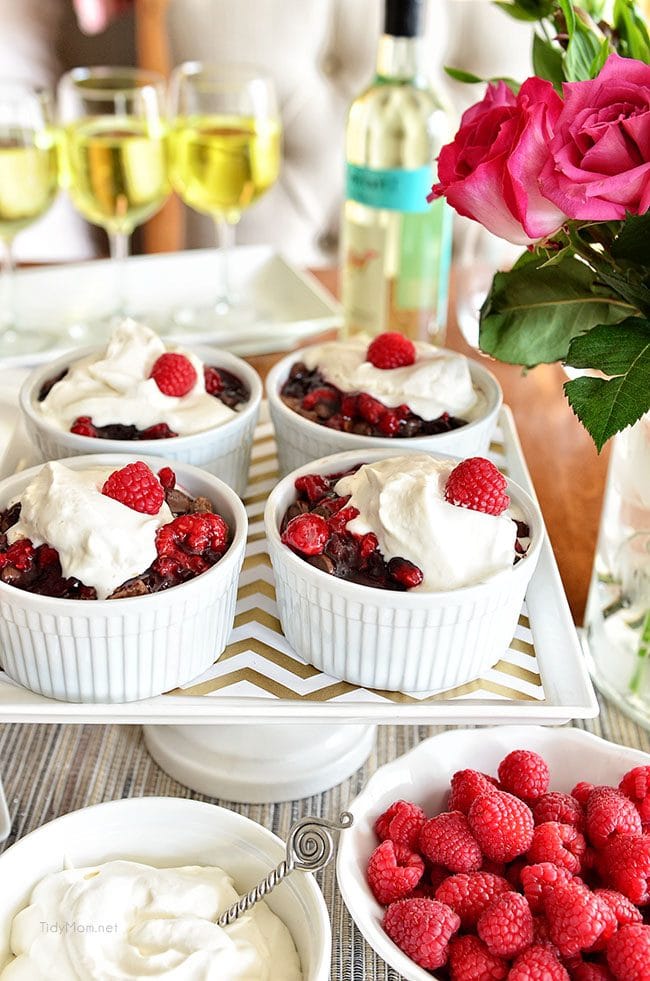 I knew I wanted to make whipped cream to top it all off  When I reached in the fridge to grab my heavy whipping cream I spied a little bottle of Baily’s Irish Cream in the refrigerator left over from the holiday and decided to add that to the whipped cream and you guys……it made it extra special!  Of course you can totally make the whipped cream with out the Bailey’s, because it’s the sweet King’s Hawaiian rolls that make this Chocolate Bread Pudding with Raspberry Sauce show stealing and red carpet worthy!! 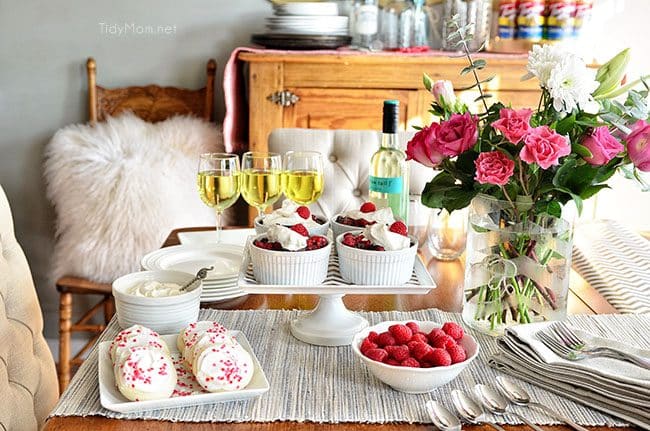 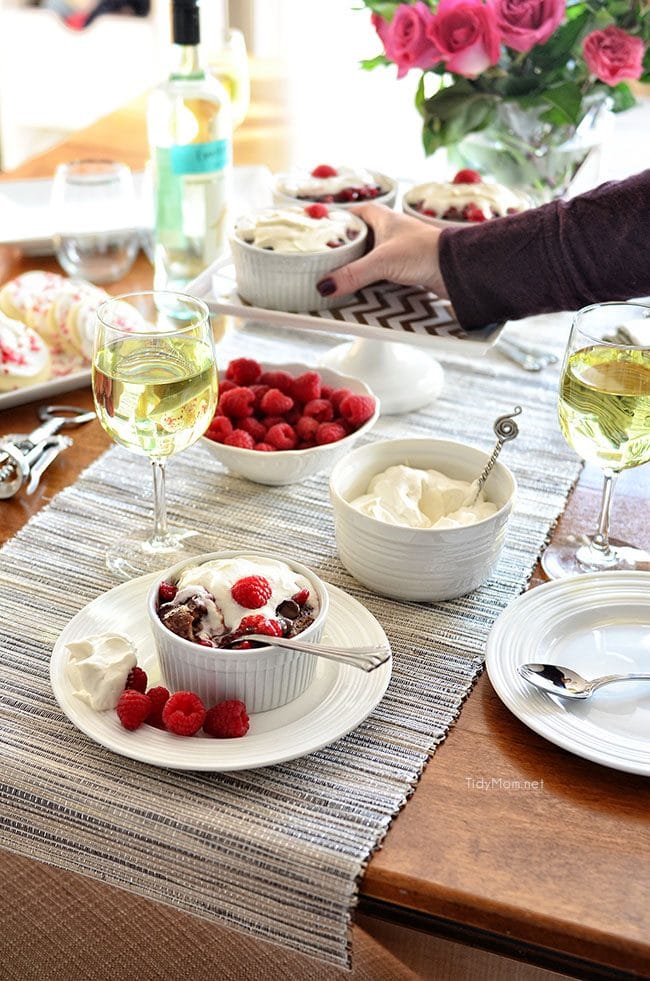 I threw together a 2015 Oscars Word Search, you can play during commercial or before the red carpet.  You could make it a minute to win it game and see who can find the most words in a minute, or just see who can find all the words first.  I filled the Oscars word search with the  2015 Best Picture, Best Actor, Best Actress nominees, and a few Academy Awards themed words. 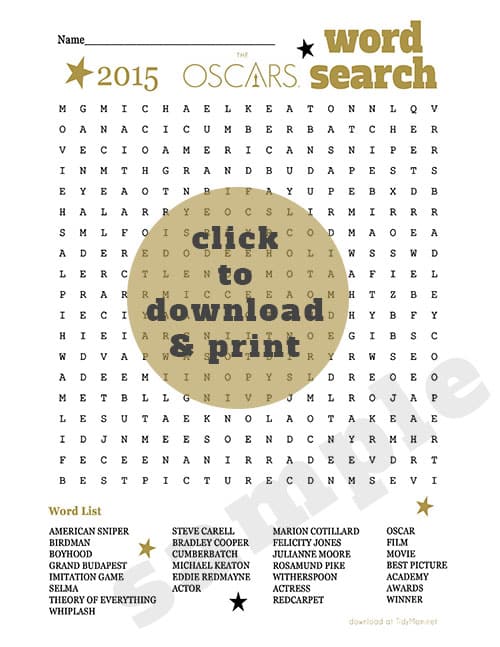 What/who are your favorites to win?  Since American Sniper is the only movie on the nominee list that we’ve seen, I’m not sure I can make an educated guess…….but I totally think it’s Oscar worthy, as well as Bradley Cooper 🙂 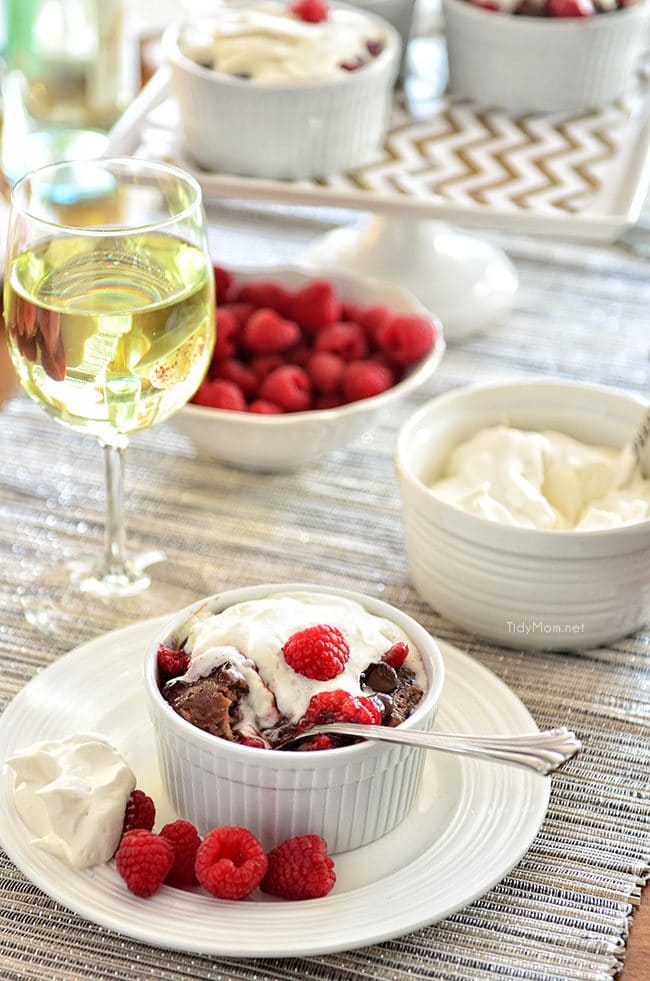 Making this recipe? Share it with us on Instagram using the hashtag #TidyMom so we can see what you're creating in the kitchen! 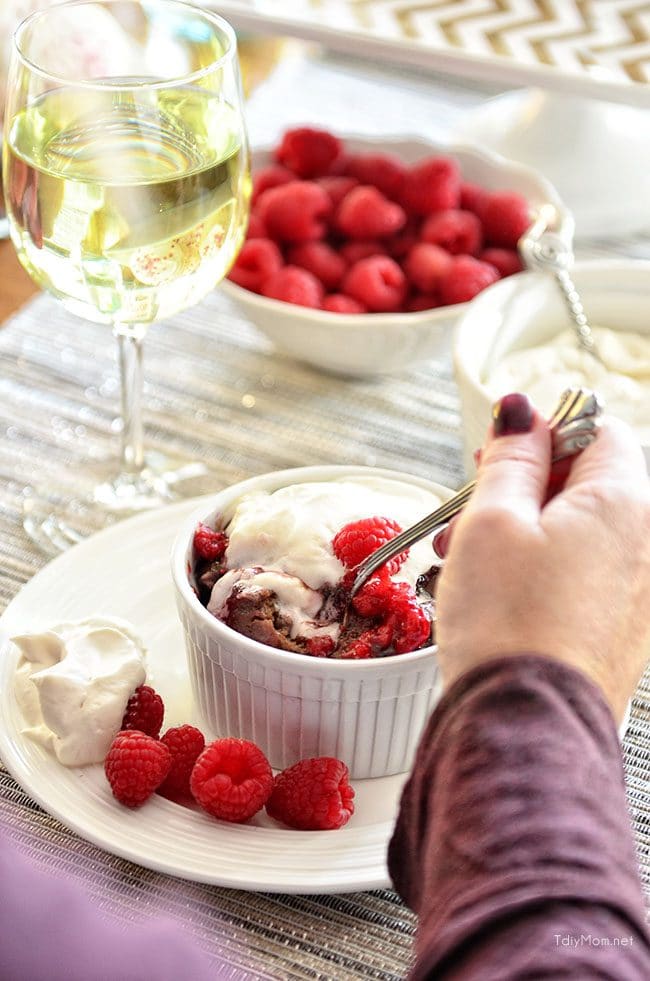 Do you invite over guests for an Oscar watch event of your own?  I’d love to hear about it in the comments. You can find even more ideas and recipes for your Oscars viewing party on StarringRoll.com for a chance to win a grand prize of $10,000!!

Disclaimer:  I have a working relationship with KING’S HAWAIIAN®.  All opinions, views, and love of their bread are all my own!!